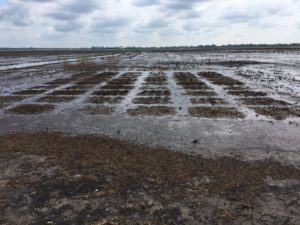 Irma spooked even the most cynical.   Stories documenting Harvey’s devastating impact on Houston were still fresh in the news as Irma churned through the Caribbean and turned toward Florida. With sustained winds reported at 175 mph, it was billed as the “storm of the century” which could hit Florida as a Category 5 storm. Residents scrambled to secure properties and stock up on food and supplies; others jammed evacuation routes, creating near standstill northbound traffic on Interstates 75 and 95.   Fuel ran short in the days immediately before impact; cars lined up at gas stations manned by deputies and spilled onto adjacent roadways, waiting as long as six hours while fuel companies scrambled to replenish pumps.

Initial projections cited the heavily populated Miami-Dade area as the most likely site of impact, prompting one of the largest mandatory evacuation orders in history. As the days wore on, the projections were revised; the storm was predicted to make landfall along the southwest coast and travel through the central portion of the state.

The storm raked across the Florida Keys (also under a mandatory evacuation order) before coming ashore on Sunday, September 10. Irma lashed the coastal southwest Florida cities of Naples and Bonita Springs before traveling inland to the largely agricultural areas of LaBelle and Immokalee and northward through Lake Placid and Sebring, bringing winds of up to 130 mph and as much as 14 inches of rain.

These areas, which are home to a large percentage of the sod production acreage in the state, were already saturated by summer rains that lingered into September. The additional rainfall quickly overwhelmed at-capacity waterways, causing significant – and in some cases catastrophic -flooding.

“Flooding is not always a problem for sod crops   although it’s tough on the grass and contributes to pest and disease pressures,” explained TPF executive director Betsy McGill. “It was the amount of water – sometimes feet of water – sitting on the sod for an extended amount of time in 90 degree weather. The turf essentially ‘simmers’, causing permanent damage.”

While many Florida sod producers experienced minimal to moderate impacts, several were particularly hard hit.  Keith Truenow with Lake Jem Farms in Mount Dora (north of Orlando – an indication of how far-reaching the effects were) reported heavy flooding as a 90-foot breach in a dike surrounding Lake Apopka allowed an estimated 10 million gallons of water per hour to pour into his property.

“When the water breached levees on the other three sides,” he said, “it was like a 350 acre bathtub. And we were without power for a week; there was no way to pump water. And if I’d had power? There’s was nowhere to pump it to,” he said. Truenow expected a near total loss of his sod crop; he estimated total damages to this and other operations to reach several million dollars.

The Sebring area was also hard hit; over two weeks after Irma, Richard Burns with Star Farms reported that he was still measuring water standing in sod fields there in feet, not inches. Star Farms also experienced significant damage to its sugar cane and citrus operations in Belle Glade.

Other growers have reported losses ranging from a few acres to 100 acres and more in crops alone, not including the costs of repairing or rebuilding infrastructure such as levees and repairing or replacing buildings and other equipment. Growers are still assessing how much impact the storm will have on inventories for the fall and spring seasons, as well as how the loss of housing for workers may affect available labor.