“You just wouldn’t believe it,” James Maulden repeated, trying both to convey – and to come to terms with – the 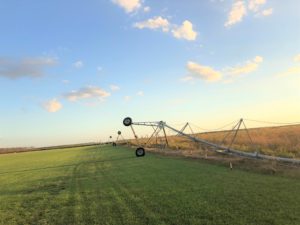 magnitude and scope of the damage that Hurricane Michael left in its wake after barreling through the Florida panhandle and into Georgia on October 10.

“There’s almost zero infrastructure.  Sewer plants are damaged, the power grid was gone, there’s still little or no telephone service in a lot of areas,” he explained on November 1st.   “It’s like a bomb was dropped. It’s like a 40-mile wide tornado went through.  You just can’t imagine it,” he sighed.

Maulden, a long-time board member of Turfgrass Producers of Florida, owns McCall Sod Farm, located north of Panama City in Bay County, one of the hardest hit areas.  He estimated that damages to the farm may reach as high a $2.5 million dollars.  Nine mangled pivot irrigation systems alone accounted for over $700,000 in losses.

He noted that the farm has begun shipping sod again, “thanks to some really good employees” who helped the farm get up and running while coping with their own personal losses.  Maulden said the company is likewise reaching out to help those employees; he himself is waiting on repairs to his personal home. “It doesn’t matter if you’re rich or poor or who are you right now.  We’re all in the same boat.  We’re just trying to help each other and get back to some sort of normal.”  He estimates that the farm will be back in full operation in early January 2019.

Allen Woerner at Woerner Farms is grateful that damage to their farm northwest of Panama City was not more severe.

“We lost 4 of five pivot irrigation systems; fortunately, the last one standing was portable, so we were able to move it around until we could replace the others,” he explained.  Their location experienced over $300,000 in damages to irrigation systems and additional damage to on-farm structures.