By Cecilia Brown, Media and Content Manager for Sod Solutions 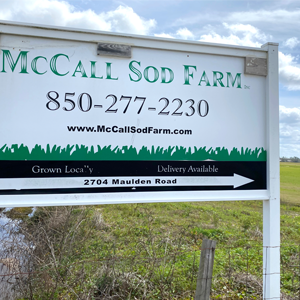 Simmons bought the farm as partners.

“Originally we bought the land for real estate, but Percy was a farmer at heart,” Maulden said. “He took the farm to the next level. We started with Centipede grass and from there we started to grow the business.”

Maulden recalled back then they would walk behind a Ryan Sod Cutter, cut the sod into 12×24 inch blocks and pick it up off the ground to place on the pallets. He said it’s been remarkable to see how the industry has changed since then.

A few years into running McCall Sod Farm, Simmons wanted to see where they could take the business. So, in 1978, they bought a tract of land in the Southport community just north of Panama City and moved the entire sod farm to its current location.

Simmons passed away on Christmas Day in 2000. At that point, Maulden switched from just looking at the farm as an investment to operating it as Simmons had before.

“That was 21 years ago. Since that time we’ve both expanded our acreage as well as adding several different grass varieties,” he said.  McCall Sod Farm now covers roughly 1300 acres, with varieties including: Centipede, Tifway 419 and TifTuf™ Bermudagrass; Palmetto and Raleigh St. Augustine; El Toro, EMPIRE and Geo Zoysia; and Argentine and Pensacola Bahia.

On October 10, 2018, one of the strongest hurricanes on record to make landfall on the Florida panhandle hit McCall Sod Farm and the surrounding area. Hurricane Michael pushed through the area with sustained winds of 160 mph. Prior to the storm, Maulden and his family traveled about 25 miles north of the farm for safety, but the hurricane hit there too. When they came back, they found that the storm had taken out just about everything in a 20-mile-wide area. The farm lost nearly everything, including all of its irrigation systems, barns and houses.

“It tore up everything. When it was over there wasn’t much left,” Maulden said.

“They’re still tearing houses down now that were destroyed in Michael. We’re still bringing back some of our fields and buildings, but pretty much everything is back online except our barn.  The builders were backed up for two years,” he said.

The farm was without power for over 30 days and since most telephone towers were gone, they didn’t have cell phone service for a long time either. It took several months, but the sod farm was  back in operation by the first of January 2019.

“Everyone worked together as a community and helped each other. From the farm end of it, we hauled everything in that we needed from the Pensacola area, such as water and supplies,” he said. “We also had vendors and friends sending pallets of water, Gatorade and other various items. We are very grateful for all of them.” He shared that they are getting closer to being back to where they were before the storm but that it’s taken time. He noted it is hard to give other farms advice on how to get through a storm like that, and that other farms in Central Florida have had similar losses. “You’ve got to know that it does get better and to just hang in there,” he said.

Maulden, who will celebrate his 78th birthday in April, said that he appreciates the challenges the turf industry presents him and always looks forward to something different every day.

“Over the past 20 years, we’ve expanded the farm with more varieties of sod, but I’m still learning about the sod business. I don’t think we ever quit learning, do we?” he laughed.

As the president of McCall Sod Farm, Maulden manages 33 employees. He said that’s proven itself to be a challenge through the COVID-19 pandemic because he just wants to do his best to keep all of the employees safe and healthy. Maulden contracted COVID in 2020; he was sick for a over a month and was hospitalized twice. He said that he is recovering and is still amazed at how his staff kept things running smoothly while he was out. His youngest daughter Nicole came in to assist with bookkeeping while employees were out. Other office employees at the farm who have had it are all doing fine now. “We’ve been able to operate even with all of the problems with COVID and our business is beginning to pick back up this year,” he said. 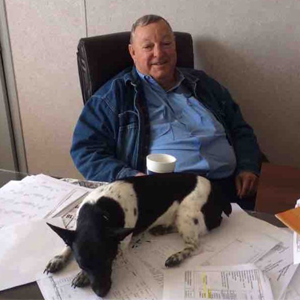 Maulden noted that the population in the Panama City area has grown from the beach out to where their farm is, and they’re mostly surrounded by neighborhood communities now.

“When we first started, no one was out here,” he said. We’re only a few miles away from the beach. It’s a pretty place to live,” he added. “In the next few years, I think the North Florida market will continue to grow and our farm will grow with it.”

McCall Sod Farm produces grass for commercial, residential and roadside grass installations. Maulden said they will continue to grow and change grass varieties while increasing production and the number of products they’re moving. He said they enjoy being a part of the community. Schools and various other groups visit on field trips to learn about the sod farm and local homeowners come directly to the farm to pick up sod to redo their lawns.

Maulden’s favorite part of the job is farming and getting up in the morning to come to work. “I have a large farm I can ride around and get away from it all – all the pressures in life. I also like seeing the transition from the time we plant sod to when we actually harvest it,” he said.

Maulden’s daughters Tammy and Amy currently work at McCall Sod Farm with him. Percy’s daughter, Marcia, who owns a third of the farm, also works there. He said that they all share the same goal: to make the farm better.

“Some days are great and some days you’ve got a lot of problems,” he said. “I always say if you run a sod farm, as long as you keep doing the same thing and keep it simple, the better off you are. Everyone knows what to do and a change in direction isn’t always a good thing.”

This article was written by Cecilia Brown (cecilia@sodsolutions.com), Media and Content Manager for Sod Solutions. Sod Solutions has helped successfully develop and release to the market over 20 different turfgrass varieties over the past 27 years including Palmetto® and CitraBlue®  St. Augustine, EMPIRE®  and Innovation® Zoysia and Celebration®, Latitude 36® and NorthBridge® Bermudagrass. The company is based in the Charleston, South Carolina area.