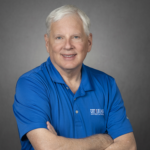 I set foot on turfgrass science history every day I go to my office. Turns out McCarty Hall sits where the very first University of Florida turfgrass research plots were established in 1922.

Those plots are long gone, but our turfgrass science program celebrates its 100th anniversary this year. I hope you’ll join us in Citra on October 4th and 5th for golf, socializing, and, of course, science.

Years from now, I believe the names Unruh, Kenworthy and Crow will be a proud part of this history. Bryan was central to the development of the BMPs and travels the state advocating for the use of science in crafting local ordinances regarding the use of fertilizer or irrigation.

Kevin Kenworthy’s drought-tolerant CitraBlue® has the potential to substantially reduce the amount of water we put on our lawns in a state where that needs to happen.

Billy Crow, who traces his academic lineage to the original UF/IFAS nematologist, V.G. Perry, invented a method to detect the root-knot nematode. Before Crow’s method of searching plugs near the surface by putting them in coffee filters and blasting them with mist to flush out the nematodes for a true count, turf owners were too often sampling from the wrong place and getting the wrong counts—and responding with the wrong treatment.

Crow’s work even prevented a golf course operator from undertaking a multimillion effort to rip out turf and just start over. Crow used his method to detect the problem, and he prescribed a solution that cost only a few thousand dollars.

What gets me most excited about the turfgrass science program—and I myself was a turfgrass science major as an undergraduate in Maryland—is what’s to come. We’ve got a young turfgrass scientist in Fort Lauderdale named Marco Schiavon and new hires in Gainesville named Pawel Petelewicz and Alex Lindsey who are going to deliver you solutions for decades to come.

And Unruh, Kenworthy and Crow are in the prime of their careers. Not only do they deliver solutions, but they deliver a pipeline of talent to the industry. For example, the UF/IFAS turfgrass science program educated Miami Dolphins groundskeeper Edwin Lamour, Nick Pool of SkyFrog Landscape (on the Gator 100 list as one of the fastest-growing Gator businesses in the world), Dr. Raymond Snyder of Harrell’s and Paul Fox of Atticus.

And my Georgia history compels me to mention another UF/IFAS turf alum, Dr. Brian Schwartz of the University of Georgia. Actually, when we’re not talking about the most contested turf at all-  the gridiron at TIAA Bank Field in Jacksonville – Schwartz and UGA have been great partners. We’ve even invited Brian to Citra.

You’re invited, too. Come celebrate a century of science and the prospect of breakthroughs and service to industry yet to come.

Scott Angle is the University of Florida’s Senior Vice President for Agriculture and Natural Resources and leader of the UF Institute of Food and Agricultural Sciences (UF/IFAS).