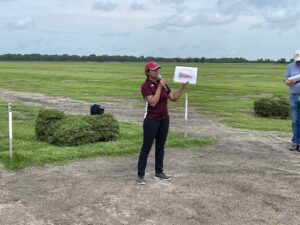 “Water is an extremely important resource and data shows that Cobalt™ is one of the most drought resistant St. Augustinegrasses ever developed,” states Dr. Chandra. “Cobalt will change how the industry views and uses St. Augustinegrass.”

Cobalt™ is an interploid hybrid created through embryo rescue technology. Sterile polyploid germplasm (with drought and pest resistance) is crossed with fertile diploid genotypes (with superior shade, cold tolerance and visual characteristics). The result is a grass with excellent drought resistance, very good shade tolerance, is tolerant of disease, has a good establishment rate and is winter hardy (USDA cold hardiness zone of 8a). It also has excellent visual quality with a dark green color and wide leaf blade.

In 2003, a group of Texas sod producers formed the St. Augustine Research Group (SARG) to fund breeding at Texas A&M. The goal was to develop a St. Augustinegrass variety with improved drought and disease resistance that also grew fast and harvested well.  After many years of work, eight elite varieties were selected based on their performance at several test areas in Texas and across the Southeastern US. 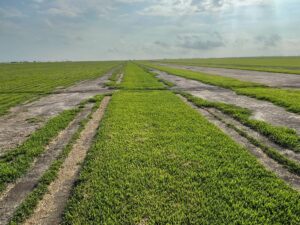 These experimental lines were planted at Kubicek Farms (South Texas) and A-1 Turf Farm (North Texas) in June and July of 2018. The lines were initially planted in 5 x 10-foot-long plots which later were extended to 5 x 20 feet.  This “long plot” layout was developed by Texas A&M in conjunction with Sod Solutions and enables the use of a commercial grade sod harvester to evaluate harvestability under typical field conditions.

All eight elite lines were evaluated for disease resistance, genetic color, overall quality, and drought resistance and were harvested 3 times: May 2019, August 2019 and July 2020. The data was compiled and analyzed and four advanced lines identified based on performance at a sod farm: DALSA 1318, 1329, 1404 and Cobalt™ (DALSA 1618).

These final four varieties were expanded and planted (July 2020) in a new area in Wharton TX.  After one year of growth, the selections were compared taking into consideration not only their performance in the larger plots but also considering data from research trials.  Cobalt™ was ranked as one of the top entries by the 2015 USDA-SCRI warm-season grass research group for drought resistance where it was evaluated across five southern states (TX, FL, GA, NC and OK). Likewise, Cobalt™ was evaluated across seven universities (eight environments) through the 2016 National Turfgrass Evaluation Program and was ranked in the top statistical group suggesting wide-range adaptation.  Cobalt™ (DALSA 1618) emerged as the top selection from these four lines and was approved as the first release.

In September 2021, a 10-acre Foundation block was established in Texas with the goal of supplying plant stock for licensees. Cobalt™ is also being expanded across Texas and Florida, with plans to include other areas in the near future.

Turfgrass Producers of Florida members will be able to see Cobalt™ in the field and learn more about licensing opportunities in late summer 2022.  Cobalt™ will be exclusively licensed through Sod Solutions for commercial production and marketing; it’s anticipated that it will be licensed in Florida through the current joint release program between Sod Solutions and Turfgrass Producers of Florida.